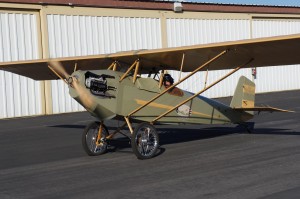 Gary spent around four and a half years, and some 1500 hours, building it, with a frame of locally sourced poplar. Spruce is usually used in airplane construction, but poplar is lighter and more flexible. Usually you use more poplar than you would spruce, but it’s generally agreed that the Pietenpol is over-engineered, so Gary built it per the plans – he’s not the first to do this. The wood came from California Hardwood in Auburn – the owner has built a Pitts in the past, so he knows the grain structure an aircraft builder is going to be looking for. 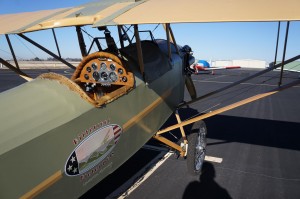 Gary’s built everything with a table saw and hand tools, and says the cowlings were probably the hardest thing to make, followed by the riveted and sealed fuel tank that sits between the wings. Stitching the leather bolsters that go around the cockpits was also a challenge. He tracks his builds using Kitlog Pro software. 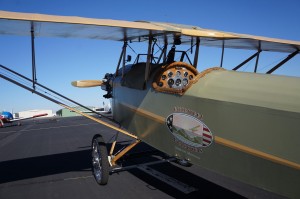 There’s a cut out in the trailing edge of the wing to make it easier to get in and out of the cockpit, but there’s no such niceties for the passenger seat. He’s flown with his son in the passenger seat, and he’s over 6′ tall, so it’s probably not as hard to get into as it looks. He does say that if he were to do it again, he’d slope the cockpit seat back a little further to make it more comfortable and easier to get in and out.

The fabric used is Dacron, and it’s painted with, of all things, Kelly-Moore house paint, which gives good UV protection. The parts were edged with pinking shears to give a stepped edge, and glued together. There are leather patches to protect the fabric from the cables.

The wing struts are usually steel, but Gary built these out of laminated hickory. They work so well that he’s made several sets for other Pietenpol owners. He also built the 66″ propeller himself – this is his fourth build, and he’s very happy with it.

In a deviation from the plans, Gary chose to use a continuous hinge on the ailerons, rather than the barn door hinges that the original used. They make the ailerons more effective, but they’re still not as effective as a more modern design. The elevator works very well. 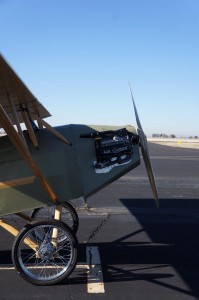 The engine is a 100hp 6 cylinder air cooled Corvair car engine, which Gary bought as a $150 rusted hulk, and completely rebuilt. The Corvair engine is lighter and more powerful than the Ford Model A that was in the original plans. It turns the propeller directly, at 2600-2700rpm for a 5 gallon per hour cruise. With a 16 gallon gas tank (modified from the plans’ 12 gallon tank), Gary’s been as far as Los Banos, around a 2 hour flight.

His cruise speed is around 75mph, and it stalls around 45mph. The takeoff roll is around 150′

The 21″ wheels are from a Harley Davidson, and use steel lined go-kart brakes. They’ll hold the plane up to around 1500rpm for engine runups.

While Gary has previously rebuilt a Taylorcraft and an Aeronca Sedan, this is his first full build. He’s looking at the plans for a Boredom Fighter.

Gary’s installed a couple of mounts for a video camera, and shot video of his grandson’s first flight, flying in formation with Lee Graybill’s Baby Ace, a shakedown flight and a flight after we’d talked about his beautiful airplane.