Our January Saturday BBQ Lunch Program on January 28 will dive into the ups and downs of flying in Europe, particularly Italy and Switzerland. Our presenter is chapter member Dave Magaw, an experienced pilot and builder based right here at Lincoln. He will talk about his experiences flying in Europe for the last nine years, and particularly in the last 4-5 years. Dave will cover some of the differences between flying in Europe compared to the USA, the airspace differences and some of the differences in the rules and regulations for flying. His experiences are only those of flying small private planes for fun and educational purposes (but mostly for fun and food), but he has pictures!

As a bit of background, Dave is 70 years old and received a U.S. pilot certificate in 1999. He received a European PPL in 2021 and an Italian Advanced Ultralight License in early 2022. He has logged in excess of 2,100 hours of flight time, about ¾ of which is in taildraggers. He towed gliders, mostly from the Byron Airport, though he retired from doing that in 2021. He flies Experimental and Light Sport aircraft, which are called Ultralights in Europe. His hangar at Lincoln holds his Pitts S1C and modified tailwheel Cessna 172, both of which he flies often. 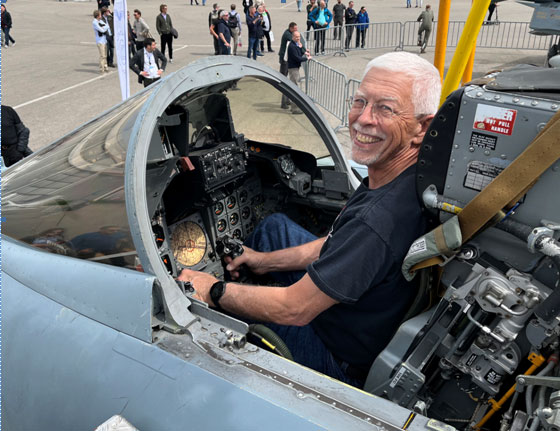 Dave Magaw at a big European airshow at Friedrichshafen, Germany.
This is not Dave’s airplane.

Dave gets to Europe for a good part of every year and is part of a Swiss group doing a full rebuild of a Pitts S1C in Switzerland. He owns and files at Groppo Trail (advanced ultralight) based in Italy. His past U.S. projects include rebuilding a Thorpe T-18, building a Wittman Tailwind, and completing a half-built RV-4 project. He is a tool guy and, with his experience and background, has helped many in the Lincoln airport community with advice, knowledge, and hardware.