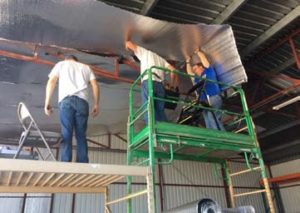 In lieu of our normal first Saturday of the month Pancakes and a Movie event, we are instead going to have another fun Hangar Work Day. Our intent is to finish up the work of insulating the hangar ceiling and complete the installation of some ceiling fans. This is all in anticipation of the coming 100 degree days of summer. Please come out on Saturday morning, June 1, at 8 am for a morning (and maybe afternoon) of work to finish up our hangar improvements. If you want, we can put on an aviation movie in the background. No pancakes, though. Maybe donuts.

EAA chapter 1541 will hold its first IMC club meeting on Wednesday, June 5th from 19:00 – 20:00 in the chapter hangar. All pilots are invited, whether instrument rated or not, to share their knowledge and experience with one another. These one hour sessions begin with a brief video scenario provided by EAA national that depicts an actual flight that encountered challenges. As an attendee you’ll be asked to put yourself “in the pilot’s seat” and think about what you would have done in the same situation. The result promises some interesting and educational discussions among ourselves.

We hope to see you there!

Based upon the weather forecast, we have decided to cancel the chapter Pancake Breakfast scheduled for Saturday morning between 08:00 and 10:00 at the Gazebo area of the airport.

The LRAA Display Day, which our breakfast supports, will still occur as scheduled between 08:00 and 12:00, though may end moving indoors if needed due to the weather. Our chapter will return to support the next LRAA Display Day scheduled for June 15.

Our monthly chapter board meeting will still be held at the hangar beginning at 10:30.

The May board meeting is on Saturday, May 18, at the EAA hangar to begin at 10:30, or as soon as we complete the cleanup of the LRAA Pancake Breakfast support, whichever comes first.

Come on out on Saturday to the Gazebo area at the airport between 08:00 and 10:00 for a pancake breakfast and to help support the LRAA monthly display day. Invite your friends and family to come see the airplanes on display and have breakfast to boot.

Our May monthly member meeting will be held at our chapter hangar at the Lincoln Airport. On Wednesday evening, May 15, we’ll start with a BBQ dinner at 18:00 with all the fixings that we can find. We’ll do some serious hangar flying up until about 19:00 when we will hold a short business meeting and do a few fun little things.

Our program for the evening will be about the Recreational Aviation Foundation (RAF) and our presenter will be Brittanee Lincoln. The RAF is a group dedicated to preserving and promoting recreational airstirps across the country. Brittanee, who flies out of Concord and is also active in several other aviation groups, will provide information about the mission of the RAF and her involvement in promoting recreational airstrips in California.

We’ll be cooking a barbecue lunch from 11:00 to 12:00, then we’ll have a discussion about the Young Eagles event last weekend – what worked well, and what we can do better next time, along with any memorable parts of the event. We’ll also have a slideshow of pictures from the event, so send us links to any pictures you took!

All are welcome to participate!

We flew 76 kids on Saturday, and we’ve started a photo gallery here.

We had eleven pilots who donated their time, airplanes, and fuel costs (at $4.90 per gallon for avgas these days) who made numerous flights between 8:30 am and 2:00 pm. We also had a good and dedicated group of volunteers from both our chapter and local community who served as the ground crew to make the event a success. The two gyroplanes that participated were a hit with the Young Eagles, as was the Globe Swift that added a classic touch to the ramp scene. The other eight participating aircraft were also busy all day with flights carrying the “eaglets.”

The Rally was a complete success and everyone had a good time. We exposed several dozen families to the Lincoln Airport for the first time and the experience was a good one for them.

There was a lot of behind-the-scenes planning and work that went into this event, most of which is only noticed because the event came off so well. Nonetheless, it should be mentioned that a Young Eagle Rally is not a spontaneous event and it requires the investment of some significant time and effort by several in the chapter, particularly our chapter’s Young Eagle Coordinator, Cheryl Andrade.

Our chapter’s next Rally is scheduled for October. Young Eagle Rallys are are a cornerstone in the national EAA organization’s initiative to introduce the youth of America to aviation, and the program has provided more than 2.1 million free rides since it began in 1992. Our chapter is eager to add to that number.

Congratulations to all who participated and made yesterday’s event such a success.