Description:
Is this tiny nick on the propeller an airworthiness item? How perfect does the paint need to be to keep the propeller balanced? If my propeller isn’t completely broken, do I still need to send it to the shop? San Carlos Flight Center has invited Samantha Bloodhart of Sullivan Propellers for an enlightening and educational presentation to promote awareness of safety related propeller and propeller governor issues.

Sam will review basic propeller knowledge for pilots, including design differences between the major manufacturers, fixed pitch vs. constant speed operation, realistic evaluation of propeller condition before flight, and the inherent dangers of deferring propeller (or any other aircraft) maintenance. She will discuss some of the common propeller Airworthiness Directives that are owner-operator responsibility (not just mechanics). Finally, she will explain the differences between overhaul, dynamic balancing, and other major types of propeller/governor service. This is all supported with numerous photos and years of anecdotes (some amusing and some amazing).

Propellers are an essential part of flight, and pilots should gain a better understanding about them. If you want to gain more knowledge about what keeps you flying, we encourage all pilots to attend.

Description:
IMC Club is a national organization meets monthly in the form of local chapters with the objective to promote instrument flying, proficiency, and safety. Pilots of all experience levels join to review actual IFR flying scenarios, review knowledge, and foster general discussion.

Description:
One of the first tasks a student pilot learns is to make sure during the preflight check that the proper fuel is loaded into the airplane. This is a critical step since having the wrong fuel onboard leads to engine malfunction and failure. Sadly, misfueling accidents continue to occur on a regular basis. But what is it that differentiates aviation fuels and why is it critical to have the proper fuel for the airplane?

In this seminar, join us as San Carlos Flight Center invites AGI Michel Vidal-Naquet as he gives a high level overview of the different fuels used in aviation: how fuel is produced from crude oil, what are the chemical differences between the grades of Avgas and Jet-fuel, and what is the chemistry of combustion and its relation to aircraft engine design. We will also address other issues such as the use of lead and discuss some misfueling accidents.

The seminar will lead to a deeper understanding of aviation fuel characteristics, and raise awareness about the critical importance of the fuel pre-flight check.

Michel Vidal-Naquet is an advanced and instrument ground instructor, and an instrument rated, commercial pilot with over 700 flight hours. He started flying in 2013 after settling in the Bay area to work as a computer scientist and engineer. His passion for aviation began during his early childhood when his family first took him on international flights. He brings a scientific point of view to his flying, and is always learning.

Description:
ForeFlight, the iPad based electronic flight tools app, provides a lot of information for pilots to use both on the ground and in-flight. For VFR pilots that have mastered the functionality of ForeFlight relevant to VFR operations, is a different approach required?

Although we have many seminars devoted to ForeFlight use, this should be an interesting and new approach specifically for instrument students. Find out how to use ForeFlight to become cleared to depart and not have to go missed in your training.

Herb Patten is the Chief Pilot at the San Carlos Flight Center, a CFI and an FAA certificated advanced and instrument ground instructor who teaches private pilot ground school at San Carlos Flight Center. He is a commercial pilot with an instrument rating, has flown over 1,500 hours into at least 120 different California airports. He is the current chairman of the Upwind Foundation, famous for its Upwind Summer Scholarship Program. In 2015, Herb was named a Master Instructor by the National Association of Flight Instructors.

Topic: IMC Topics Are Taken From Real Life Events and Discussed to Aid the Decision Making Process for Pilots.
On Wednesday, January 6, 2021 at 19:00 Pacific Standard Time 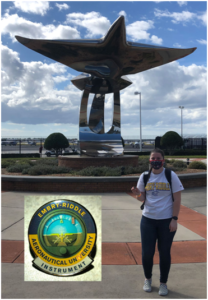 Amy Whelan, chapter 1541’s first Ray Scholar, just passed her IFR checkride and is now Instrument Rated! Amy is shown here with her Embry Riddle University IFR achievement pin, standing in front of the “Pathways to the Sky” statue at ERU (known to the students as the Eagle Statue). Her Designated Pilot Examiner was a retired Air Force Pilot who flew out of both McClellan and Mather.

Amy says she is really enjoying college, but is looking forward to coming home for Christmas. She had the highest score in her class on the written test and finished her first semester on the Dean’s List, which caused proud Papa Scott to note “Pretty smart kid – must be from her Mom. She comes home tomorrow and is home for 3 weeks. When she returns to Embry-Riddle she will start her commercial rating.”

Dear Members and Friends of CalPilots

We recently received notice from the Recreational Aviation Foundation (RAF) that the National Park Service (NPS) is considering closing the Stovepipe Wells airport in the Death Valley National Park.

According to the RAF, if the Park Service does not receive at least 400 comments from the pilot community regarding Stovepipe Wells, they will ignore the pilot’s input. WE NEED YOU TO COMMENT BEFORE DECEMBER 23.

I strongly encourage anyone who would like to help preserve our access to this airport to fill out this form:

It doesn’t take long, maybe ten minutes. This short amount of time could help preserve a valuable national resource. The complete message from the RAF is below. It contains some information that my be useful as you complete the comment form.

Managers of Death Valley National Park in California are seeking public input regarding future use of the park’s Stovepipe Wells Village. One of the park’s proposals is to change the Stovepipe Wells airstrip into a dedicated night sky viewing area due to the prohibitive maintenance expense of repaving the runway. This is due to the park’s perceived lack of visitation to the strip, combined with a growing interest in attendees in night-sky astronomy. With this change, the airstrip is in danger of closing entirely to light aircraft visitation.

The Recreational Aviation Foundation (RAF) believes that pilot activity and stargazing can successfully co-exist with minor changes to existing infrastructure, and we are urging members to submit comments to the park in support of both pastimes.

• Night Sky Viewing to Replace Airstrip: night sky viewing events in the park regularly attract over 250 people, and very few people use the airstrip at Stovepipe Wells. The park proposes changing the airstrip into a place where astronomical societies can set up and camp with their large telescopes, while providing an opportunity to experience the park’s spectacular dark skies. The Furnace Creek Airport, 18 miles away, would still be available for small planes.

If the Park Service does not receive at least 400 comments from the pilot community regarding Stovepipe Wells, they will ignore the pilot’s input. WE NEED YOU TO COMMENT BEFORE DECEMBER 23.

Additional details and comment submission form can be found at the following link:

The RAF suggests the following talking points for members who wish to comment:

· Pilots support stargazing. This is a very successful combination of compatible pastimes. This has been proven at Havana, Illinois, where fly-in stargazing events draw many campers both by air and car. The Blue Canyon airport at Nyack, in Tahoe National Forest is another perfect example.

* Current facilities at Stovepipe Wells are at about 1/2 mile hike away. The airstrip will see a significant increase in visitation should facilities such as a dedicated camping area, as well as toilets be provided to visitors to the airport.

· At 3,260 x 65 ft and a significant existing visitors area, there is ample room for both activities at Stovepipe.

· Providing for under-wing camping at the airstrip helps disperse usage, and puts no additional strain on the NPS campground.

· Its daylight use by small planes minimizes impact to campers and star gazers.

· This airport has historical value, having been established in 1948.

· Stovepipe Airstrip provides another feasible way to access this special land. For many, driving to Stovepipe Wells represents a huge investment of time, and access by small plane opens up that opportunity.

Thank you in advance for your support of this RAF Call to Action! The RAF will be following up with final comments on our website in the near future.

Our monthly online chapter meeting will begin at 19:00 on Wednesday, December 16th.

Our program will be given by chapter member Mark Siemens on “My COVID Project: The Making of Scarlett”. Mark will detail the saga of transforming his recently acquired Cessna 182 into a 21st century dream plane, and lessons learned doing it.

Here is the info to join the party:

Hannah Treehan, our current Ray Scholar, had her first solo mentioned in the EAA newsletter :o)

This safety seminar is open to current and aspiring Private Pilots, and will be of particular interest to student pilots and those who are preparing for a flight review.

Kyle Smathers started flying in 2011 and is passionate about aviation. Kyle graduated from SJSU with an Aerospace Engineering degree, and now works as a CFI at San Carlos Flight Center. He is a Commercial: ASEL, Instrument Airplane Pilot. He offers training in Private Pilot, Commercial Pilot, High performance transition, Complex transition and Flight review.