Our IMC/VMC Club for the month of November will be online from 7 pm to 8 pm on Wednesday, November 3rd. The program will have both IMC and VMC components.

The IMC part will be a continuation of last month’s discussion about missed approaches and when you have to make the decision to begin the missed approach procedure; this will be led by CFII Scott Thompson. The VMC part will also be a continuation of our “What Would You Do?” scenario from October, where a pilot is unable to maintain altitude and has to decide whether to land on a highway. More information will be provided about the pluses and minuses of landing on highways!

FAA Wings credit is available for this event by registering here, and all pilots are invited to participate. This is the Zoom link to join the meeting, which will be sent out again on Wednesday morning.

The entire flight advisory may be accessed and downloaded at the following address:

Pilots are advised to check NOTAMs frequently for possible changes prior to operations in the area.

NOTAMs will be published at least 24 hours in advance of any GPS tests.

Next Wednesday, October 27th, KMYV are having the main runway and taxiways swept. Runway 14/32 will be closed during this time. A NOTAM has been issued for 7am-6pm.

The apron/hangar areas will be done the following day, Thursday, October 28th.

Shuttle, Houston: Life in the Center Seat of Mission Control

On Saturday, November 6 chapter 1541 will host a special event at our EAA hangar at Lincoln Regional Airport (KLHM). Our visiting presenter will be Paul Dye, editor of Kitplanes magazine, who retired in 2013 as the longest-serving NASA flight director in history. In his career at NASA, was involved in 39 missions, including nine as the lead flight director. 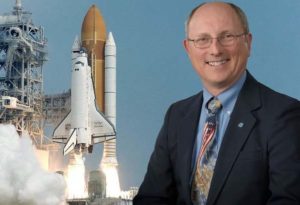 As flight director, he planned, directed and controlled the activities of the space shuttle team. His missions included both the first trip to the fully assembled Mir space station in 1996 (STS-79) and the last docking of a space shuttle at Mir in 1998 (STS-91). Paul has written about his experiences in a highly rated book available on Amazon. He will talk about talk about what it took to fly the shuttle, and how a life in aviation informed flying the shuttle… and vice versa.

Our speaker will be arriving at 0900. Paul will be traveling from his home at Dayton Airpark in Dayton, Nevada and if weather permits, he will be flying here in his SubSonex jet. His presentation will begin at 10:00 a.m., after which we will be having a BBQ lunch at the hangar.

Ever wonder what is needed to get an Airframe and Powerplant (A&P) rating, and how you could get one? Our monthly online chapter meeting will feature a presentation on the Aviation Maintenance Program at Sacramento City College (SCC) by Kevin Goehring who is Professor of Aeronautics at SCC. The SCC Aviation Maintenance Program is one of the oldest continuously operating A&P programs in the world. It was founded in 1932 and is currently located at McClellan Park. It offers a two-year program organized to train students as airframe and powerplant maintenance technicians.

Online hangar chat will begin at 6:40 pm. The main meeting will start at 7 p.m.

We will be having our third Saturday of the month pancake breakfast this coming Saturday 10/16, in conjunction with aircraft Display day. Breakfast will be from 8 a.m. to 10 a.m. in the EAA hangar (S-12) at KLHM. Stop by if you can for pancakes, eggs, sausage, juice and coffee, and a fun chew and chat session. The suggested donation is $7. We will also be offering Sim rides in FlightSim One and Two.